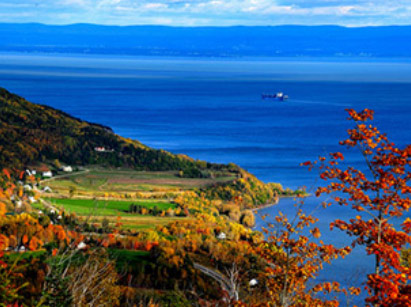 The dot had a name. Baie-Saint-Paul.

Saint Paul. Another one who’d seen something unlikely on the road. And whose life had changed.

“We’re on the road to Damascus,” said Armand with a smile. “Or Charlevoix anyway.” It was an area so beautiful, so unique, it had attracted visitors for centuries. At least one American president had had a summer home there. But what Charlevoix mostly attracted were artists, Quebec artists, Canadian artists. Artists from around the world. (The Long Way Home, Chapter 21)

Louise has described the Charlevoix Municipality and specifically Baie-Saint-Paul as “an area so beautiful it almost defies reason” and by simply looking at these photos you can see why. So stunning, in fact, that the region was a favorite locale of the Group of Seven, a.k.a. the Algonquin School, a collective of landscape artists who immortalized the area and spawned the first major Canadian national art movement. 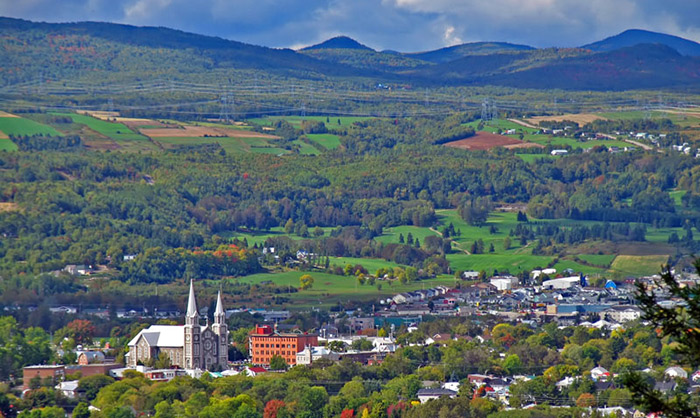 Established as a part of New France in 1678, the village is situated in a valley at the mouth of the Gouffre River and bordered by steep cliffs. Baie-Saint-Paul’s geography made it isolated and nearly inaccessible for almost 150 years, until a road was built in 1812 connecting the settlement to Quebec City.

An odd and unflattering historical side note: Baie-Saint-Paul first came to international prominence in the 1770s when Dr. Philippe-Louis-François Badelard named a local ailment he was researching the “Baie-Saint-Paul maladie.” The condition, it turns out, was a strain of venereal disease and his conclusions became one of the first medical studies published in Canada.

On a more entertaining note, Cirque du Soleil was founded in Baie-Saint-Paul in 1984 by former street performers, Guy Laliberté and Gilles Ste-Croix.

Today, its quaint narrow streets make it a premier destination for tourists and it has one of the highest concentrations of art galleries and craft boutiques in all of Canada. The surrounding countryside offers kayaking, bicycling, bird-watching, and miles of hiking.

Louise mentions both Auberge La Muse and the Galerie Clarence Gagnon in the acknowledgments of The Long Way Home and notes that she took some “artistic license” in describing them.

The “real” Auberge La Muse is a beautifully appointed Victorian Hotel that offers amazing getaway packages including everything from spa treatments to whale-watching. La Muse also houses an eco-friendly restaurant that serves up locally sourced fare and whose philosophy is one of “social, economic and environmental balance.”

The Galerie Clarence Gagnon was the first art gallery to open its doors in the Charlevoix region back in 1975. It is named for the great Québécois painter and Baie-Saint-Paul resident, Clarence Gagnon, who is credited with “inventing a new kind of winter landscape that consisted of mountains, valleys, sharp contrasts, vivid colours, and sinuous lines.” Aside from the traditional buying and selling of works, the gallery also offers appraisals, framing, and restoration.

Oh, and that American president who had a summer home in the region? That would be none other than William Howard Taft, who the locals jokingly referred to as the “Little Judge” on account of his enormous size.