“Some malady is coming upon us,” Gamache quoted under his breath. “We wait. We wait.” (The Beautiful Mystery, Page 110, Trade Paperback Edition) Gamache’s quote above, as he points out, is a direct line from T.S. Eliot’s play, Murder in the Cathedral, and he repeats it in Louise’s eighth novel when confronted by an ominous plaque that may hold a clue to murder. Eliot’s play is a perfect reference as Gamache has come to the monastery of Saint-Gilbert-Entre-les-Loups to investigate a homicide.

Murder in the Cathedral, as Gamache tells the reader, details the assassination of Thomas Becket, the Archbishop of Canterbury.

Becket, who had a long running feud with King Henry II over the rights of the Church verse those of the Royal Government, was bludgeoned and hacked to death in 1170 in Canterbury Cathedral by way of the King’s command. Becket was later canonized as Saint Thomas and today is regarded as the “protector of the secular clergy.” 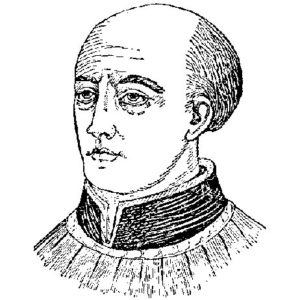 T.S. Eliot, who was also a big inspiration on The Cruelest Month, dramatized Becket’s story in 1935. Rather than betray his conscience, Becket chose martyrdom, and, knowing Louise, she specifically chose the story of Saint Thomas to illustrate her ongoing theme of morals: right versus wrong, principles, and, of course, the conscience itself.

“Gamache sat up in bed. He knew only two things could give a killer a good night’s sleep. If he had no conscience. Or if had a conscience, and that conscience had been an accomplice.” (The Beautiful Mystery, Page 106)

“You’re willing to throw the abbot to the wolves, you just don’t want it on your conscience. Instead you imply, suggest. You all but wink at us. But you don’t have the guts to stand up and say what you really believe.” (Page 230)